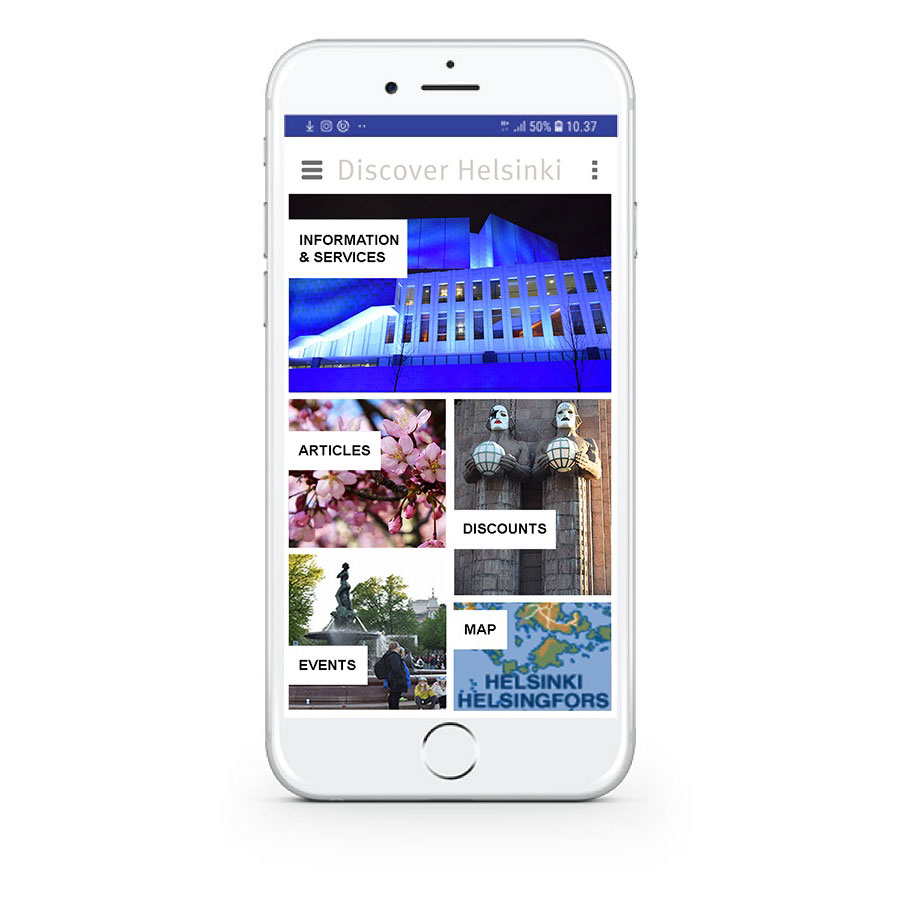 Our app gives you information that will save you both time and money during your stay in Helsinki.

Helsinki is served by an efficient public transport system. Helsinki’s relatively small size makes it a walking-friendly city which, combined with multiple public transportation choices, makes getting around simple and enjoyable.

Trams, buses, commuter trains and the metro service the mainland area of the city, while the numerous islands that dot the coastline can be easily reached by ferry.

Children under the age of 7 travel free of charge on public transport.

The public transportation system has three zones: internal, extended region (2 and 3) and the whole region (all zones). Internal covers a single city. Regional covers the Helsinki metropolitan area or the whole area without Helsinki. The whole region covers the Helsinki metropolitan area and additionally the Kerava, Kirkkonummi and Sipoo municipalities.

A new system comprised of four (4) zones will be introduced in April 2019.

The transport system offers a vast number of different tickets and several ways to get them.

Single fare tickets can be bought from bus drivers, ticket machines, by mobile app or by text message.

Text message tickets are only valid on the metro and its feeder lines, trams, commuter trains within Helsinki, the ferry to Suomenlinna, and Helsinki bus. Each metro station and ferry stop, and most railway stations, are equipped with at least one ticket machine.

Tickets purchased in advance from sales or service points and loaded on a single-charge card are valid from the time they are first used.

Ticket machines and drivers only sell Helsinki internal and regional day tickets. The tickets are paper tickets and they are valid from the moment of purchase.

• New ticket machines sell day tickets for 1-7 days for all zones. The machines print the tickets on single-charge cards and they are valid from the first use.

Most users of the public transport have a Travel Card, an RFID card used as an electronic ticket. Users can load period and value on their cards. Period ticket offers unlimited travel for the dates paid for. Value is used to pay for one trip, which may contain changes. The price of a single trip is lower when paid with the travel card instead of buying a single fare ticket.

Internal single trip tickets are valid for one hour (for the eastern and north eastern feeder lines 80 minutes). For regional tickets the transfer time is 80 minutes or 100 minutes for the ticket covering the whole region.

On buses, the driver checks tickets as passengers board. The metro, local trains, trams, and ferries use a proof-of-payment system: fare inspectors check tickets on randomly selected vehicles, and charge a fine of €80 and the price of a single ticket to those who do not have one. If a passenger has forgotten his/her Travel Card with valid travel period, the passenger may later visit a service point of the transport company and will not have to pay the fine.

Show your ticket or your travel card to the card reader when boarding a vehicle or entering the metro/Suomenlinna ferry. Penalty fare and a single fare are charged from anyone travelling without a valid ticket.

Our app gives you information that will save you both time and money during your stay in Helsinki.

Helsinki is well served by public transport networks. You can start your exploration of the city’s many landmarks by taking tram no. 2 with its circular route. After the tram ride, you can try the metro, take a bus or even catch a ferry. Getting To And From The Airport Helsinki International Airport is located […]

The influence of plein-air painting The adoption of the plein-air method drove Finnish artists out into the midst of the peasantry and into the natural landscape. Artists, who usually had an upper-class background, began to make excursions into the “original Finland” that was supposed to lie in the forest wilderness of Karelia. Romanticism Landscape painting […]

Finns have had a reputation of hard drinking. The nation’s favourite drinks have been beer and vodka, but there is a rapidly growing cocktail culture with a handful of bars that take cocktails seriously.  Sling In (Mikonkatu 8) is one of the oldest cocktail bars in Helsinki, having started in 1999 when cocktail culture was still […]

35 Art Galleries and Museums in Helsinki

Helsinki has a diverse range of museums, galleries and private art collections and here we present 35 for you to choose from. Pick your favourite for a day out, or even just for an afternoon excursion. Or work your way through our list and decide afterwards which one is your favourite! Either way, you will […]